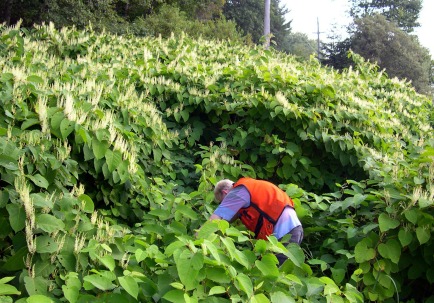 (http://www.nyis.info/)
Non-native plant species are invading new regions at an unprecedented rate, exerting strong impacts on ecosystems and human welfare. When non-native plant species reach a high abundance, they have the potential to dominate an ecosystem, impacting not only individual resident species, but also entire population dynamics. Invasive plants are responsible for the degradation of natural habitats worldwide, posing a serious threat to native species assemblages by homogenizing ecosystems. Additionally, invasive plants have multiple direct and indirect impacts on plant communities, soil chemistry, ecosystem function and arthropod assemblages. In order to assess impact on an ecosystem through ecosystem change and biodiversity conditions, bioindicators such as arthropod diversity, are used as accurate, cost-effective alternatives to time-consuming and near-impossible total forest biota inventories.

Throughout the eastern United States, Japanese barberry (B. thunbergii), and Japanese knotweed (Fallopia japonica) are two particularly noxious invaders, both characterized as “extremely invasive” species. Initially utilized as ornamentals, B. thungbergii and Fallopia japonica have spread to form dense stands in deciduous forests, abandoned fields,roadsides and steep hillsides, preventing native understory species from growing. Habitats invaded by Fallopia japonica had a lower number of plant species and a lower overall abundance and morphospecies richness of invertebrates. Consequently, overall biodiversity and quality of forest ecosystems are seriously affected, as the reduced abundance of arthropods affected diets of larger forest predators such as salamanders, small mammals, and birds.

Pittsburgh’s Emerald View Park is composed of many steep hillsides, many of which constitute the famous Mount Washington Overlook. Much of this hillside terrain is consumed by invasive, alien plant species, primarily Japanese knotweed. Mount Washington Community Development Corporation (MWCDC), works tirelessly to remove invasive plant species, largely motivated by the residents and homeowners’ desire to protect “The View”. Pictured below is a remediated swath of Emerald View Park, where areas formerly overtaken by knotweed have been replanted with native trees, grasses and shrubs. 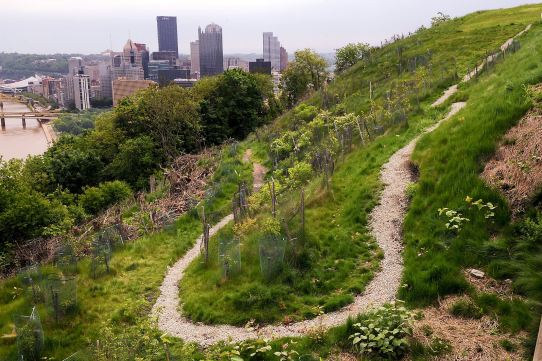 If all goes according to plan, I will be conducting a research experiment at both Emerald View Park, and at Eden Hall Campus. Provided that the city approves my permits, I will be trapping ground beetles (Coleoptera, Carabidae) in order to identify and catalog them so that I can assess the impact of invasive plant species removal programs on arthropod populations. I will utilize pitfall traps, which are a passive trapping technique. Have you ever seen a ground beetle? Possibly not. They are shy, often traveling beneath leaf litter on the surface of the soil, and do not respond well to active sampling. So, in order to get my hands on some of these bugs, I will be digging small holes in the ground, in which I will place small cups filled with water and a surfactant. Overnight, the bugs will become more active and fall into my traps. The surfactant will create tension on the surface of the water, preventing the beetles from crawling back out. Sad, but important for science. I will then spend significant time identifying them underneath a microscope, and hope to preserve and hoard my samples. Check out the picture: carabids can be beautiful! 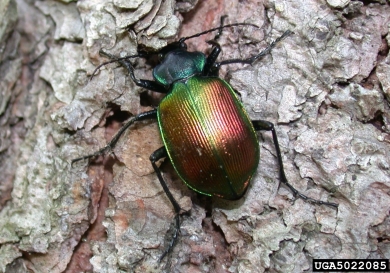 Now that I’ve explained the impacts of invasive plant species on biodiversity, and have discussed ground beetles a little, how do you think invasive plant removal programs will impact beetle populations? Do you think that beetles possibly may like dense, invasive understory? How do you think removal efforts, consisting of volunteer work crews ripping out vegetation and running woodchippers, will affect these insects? Once these hillsides are remediated with native plants and grasses, how do you think that arthropod biodiversity will respond? Comment below with your thoughts!